Relating silk emergence at pollination to kernel set at harvest

Successful harvest of corn seed or grain requires adequate pollen when silks are receptive during pollination. Pollen shed, or anthesis, is controlled by a combination of genetic and environmental factors. The genetic background of the corn plant provides a general baseline for the necessary number of growing degree units until anthesis.

Once pollen grains have matured inside corn anthers, these anthers begin to dry and dehisce. As anthers dehisce, they allow pollen grains to fall into the open air and possibly land on receptive corn silks. The process of pollen growth and maturation inside corn anthers with the subsequent drying and splitting of corn anthers to allow pollen release is similar to the process of growth and maturity in soybean, with the drying and splitting of the pods to release the soybean seeds.

Silk emergence is also controlled by a combination of genetic and environmental factors. The genetic background of the corn plant provides a general baseline for the necessary number of growing degree units until silks emerge. Temperature and available moisture also play extremely critical roles for silk emergence, elongation, and exsertion past the tip of the husk. Under ideal temperature and moisture conditions for corn growth, silk exsertion is very rapid and consistent throughout similar areas of the field. However, if corn plants are subjected to dry conditions or drought stress, silk emergence may be delayed and rates of silk growth reduced. Changes in silk growth may affect the number of kernels set on the harvested ear.

In the USA, Pioneer conducted a field study relating silk growth at pollination to kernel set at harvest. Ear shoots were covered before any silks were exposed. On the day before silks were to be exposed to pollen, researchers selected 20 ear shoots, clipped the silks back to the tip of the husk, and covered them with ear shoot bags for 1 day. The next day, the shoot bags were removed from 10 of the shoots, exposing the silks to open pollination for 1 day. These ear shoots were then covered with bags to eliminate additional exposure to pollen.

The remaining 10 ears were hand-harvested. New silk growth was measured from the tip of the husk for silks attached to developing ovules in kernel positions 5, 15, 25, and 35 from the base of the ear. Cob length and width were also measured. Silk lengths were measured by covering the exserted silks with red “carpenter’s chalk.” The ears were carefully extracted from the husks with silks still attached, and the lengths of red silks at the various kernel positions were measured. This procedure was repeated daily during the entire pollination window. Environmental and soil moisture conditions were nearly ideal for corn growth and pollination. After the crop matured, the selected ears were harvested, kernels per ear were counted, and grain yield per ear was measured.

The following series of pictures illustrates daily silk growth and kernel set of matched ears during pollination. Data in the graphs are averages of 10 replications. Pictures for a particular day represent average responses. 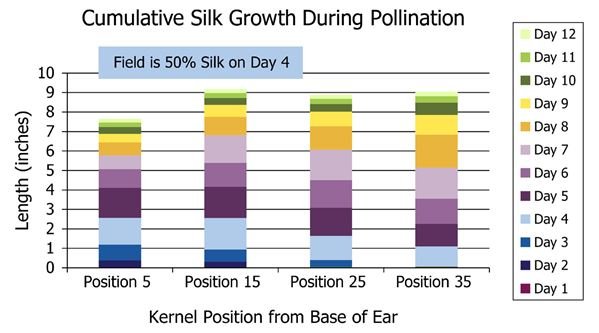 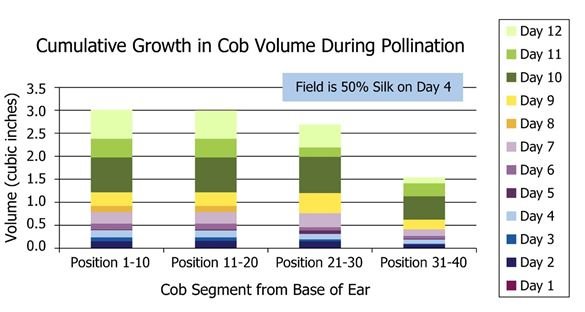 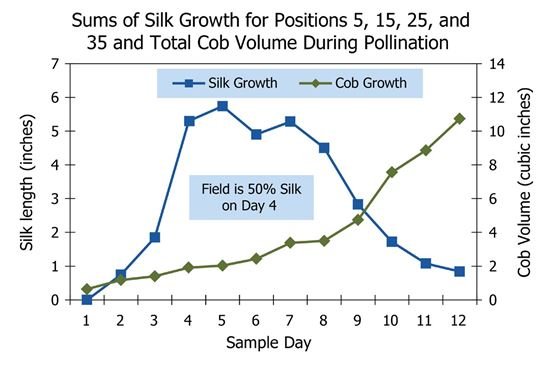 Silks remain attached to the developing ovule until the ovule is fertilized. After the male and female gametes have fused, the developing ovule creates an abscission layer at the base of the silk. The silk no longer receives water and nutrients, causing the silk to turn brown and die. Usually a silk will start to turn brown about one day after successful fertilization. A more accurate and timely method to estimate the percent of successful pollination in a field is the following method:

A few silks may remain attached to ovules after pollination is complete. In this study, the silks that were still attached did not grow past the tip of the husk (see picture above). When this occurs, the end result is a mature ear with a few missing kernels.

Under certain environmental conditions, some hybrids may produce ears with a few missing kernels at the base of the ear even when moisture and pollination conditions appear to be ideal. In these studies, total growth of silks at the very base of the ear was less than total silk growth along the rest of the ear (see “Cumulative Growth During Pollination”). The combination of slightly less total silk growth at the base of the ear and the tendency for silks to occasionally not emerge from the husk may at least partially explain this incomplete kernel fill.

The crown of the mature corn kernel has a silk scar where the silk was attached to the developing ovule. This silk scar can be difficult to see on kernels of some corn hybrids. This photo is of a corn hybrid that shows a prominent silk scar at maturity.

Grain yield per ear is a function of the total number of kernels produced multiplied by the weights of these individual kernels. In these studies, grain yield per ear correlated very highly with the number of kernels produced per ear. A small loss in kernel number does not substantially reduce grain yield because the kernels surrounding the area of the missing kernel will often compensate by becoming a bit larger. However, as the loss in kernel count becomes excessive, the remaining kernels on the ear cannot grow sufficiently to compensate for the loss in kernel numbers. Ears produced on “Day 5” and “Day 8” have different appearances but similar grain yields and kernel counts. Corn ears will often compensate for poor kernel fill at the base of the ear by increasing the kernel fill at the tip. The corn plant has a specific amount of resources that it will devote to grain fill. During the grain-filling interval, the corn plant will adapt to the best of its ability with the resources available to produce maximum yield of the viable kernels attached to the corn ear. 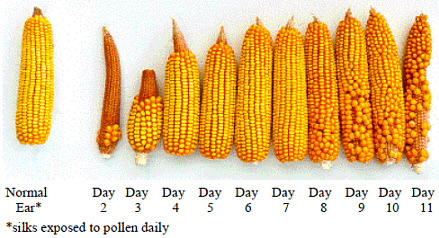 Grain yield per hectare is also a function of the total number of kernels per hectare times the individual weights of these kernels. Approximately 85% of the variability in grain yield is related to the number of kernels produced per hectare while the remaining 15% of the variability in grain yield is related to the weights of these kernels (Otegui et al., 1995). Corn growing on hectare of soil under specific environmental conditions is capable of devoting a certain amount of resources to grain yield. Two corn paddocks with similar grain yields will most likely have similar amounts of kernels produced per hectare. The paddock with the higher population will likely have more but smaller, harvested ears than a paddock planted at a lower population. The challenge before agronomists and farmers is to manage an ever-changing supply of resources so that the corn properly partitions these resources between vegetative and grain yield demands. 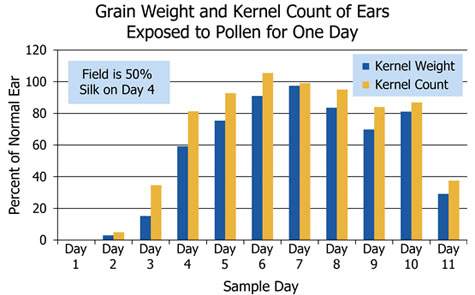 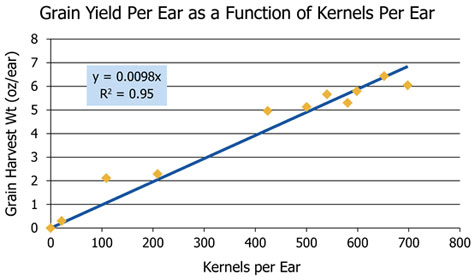 The foregoing is provided for informational use only. Please contact your local Pioneer Seeds representative for information and suggestions specific to your operation. Product performance is variable and depends on many factors such as moisture and heat stress, soil type, management practices and environmental stress as well as disease and pest pressures. Individual results may vary.

Your Seed is backed by
local experience

With dedicated and highly skilled team members located right throughout Australia you can be sure of accessing the best local knowledge to help you maximise your investment in Pioneer® brand hybrid seed. Get in touch with your local Territory Sales Manager or Farm Services Consultant today.