Ways to manage soil compaction are:

Water held in soil is essential for plant growth. Each rainfall and irrigation event replenishes soil water as growing crop plants deplete this water. Soil texture, bulk density, and organic matter primarily determine the soil’s water-holding capacity. The physical properties of water and soil govern a soil’s ability to retain water and the plant’s ability to extract this water. Soil compaction is a ‘hidden yield robber (Figure 1). Management that minimises soil compaction and increases organic matter creates the greatest opportunity for soil to retain the maximum amount of plant-available water and nutrients to support plant growth. 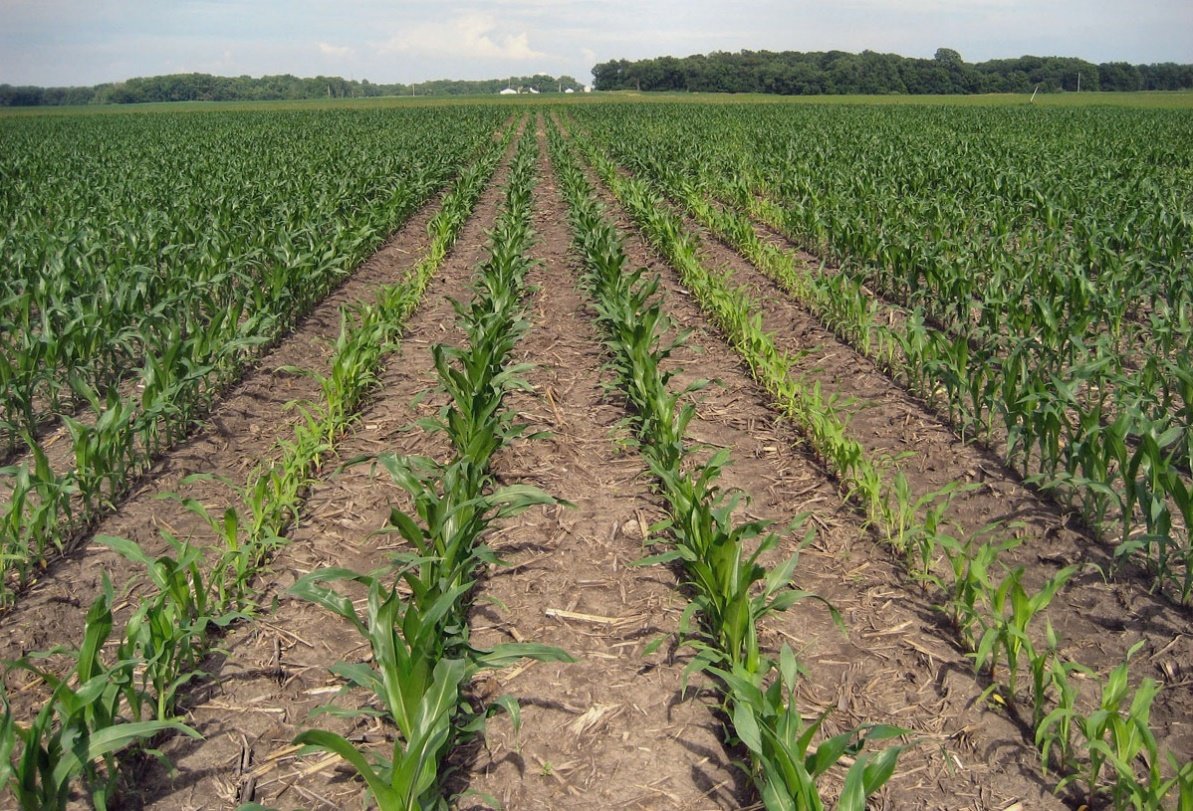 Figure 1. Areas of stunted yellow corn in a field likely resulting from soil compaction created during the previous harvest. Soil compaction can restrict root growth of plants as well as reduce the ability of soil to retain and supply water.

How does soil retain water?

Three physical properties of water – ionic interactions with nutrients and other ions, a strong force of cohesion, and a strong force of adhesion – create the forces that hold water within the plant root zone (Strachan and Jeschke, 2017). Cohesion is the ability of water molecules to stick to other water molecules. Adhesion is the ability of water molecules to stick to other molecules that are not water molecules. These forces interact with soil-bound cations, clay minerals, organic matter, and other solid materials that constitute soil colloids. If these forces were not present, the force of gravity would pull water molecules deeper into the soil profile where they would no longer be available for plant uptake. Soil pores retain plant-available water. Soil texture, organic matter content, and bulk density determine the distribution and size of soil pores (Hillel, 1980).

The soil mineral fraction consists of silicates and aluminum hydroxy silicates, and soil organic matter contains oxygen and nitrogen atoms essential for retaining water. Oxygen and nitrogen atoms in both soil constituents are capable of hydrogen bonding with hydrogen atoms of water molecules. In addition, the chemical structure of aluminum hydroxy silicates in the soil mineral fraction and the molecular structure of organic acids and other materials in soil organic matter create net negative charges that are dispersed among water molecules located next to these soil constituents. Negative charges associated with soil minerals and organic matter also create cation exchange sites. Cations associated with these sites produce positive charges that are dispersed among the water molecules located next to these cations. The combined forces of ionic charge dispersal and hydrogen bonding hold water molecules very tightly within the soil matrix and negate the downward force of gravity (Figure 2). 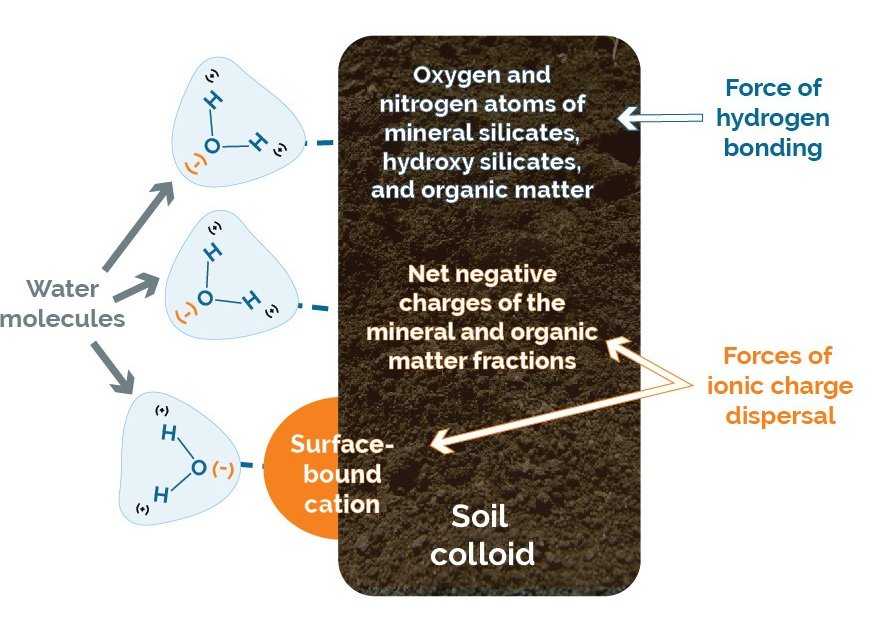 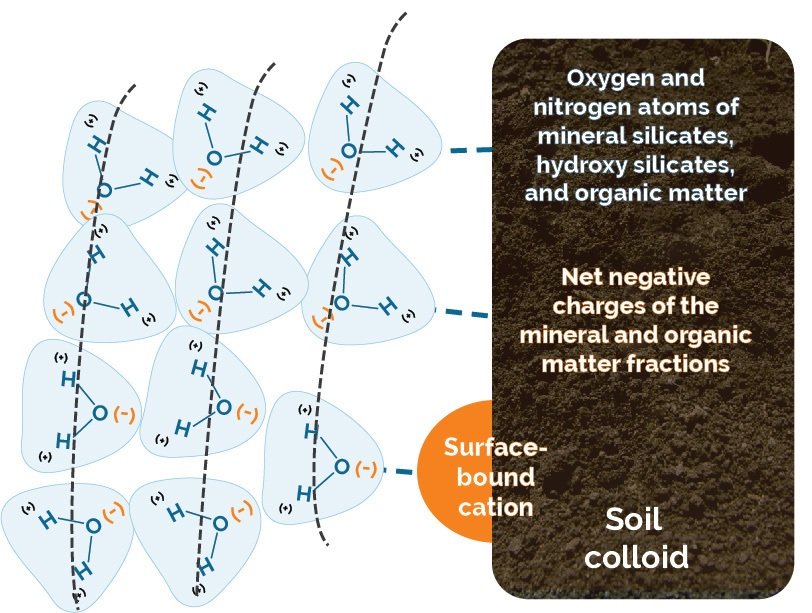 The size of the opening at the base of the soil pore deter-mines the pore’s ability to retain water (Hillel, 1980). Water molecules stretch across a pore space formed between soil colloids like a chain stretches between two poles (Figure 4). 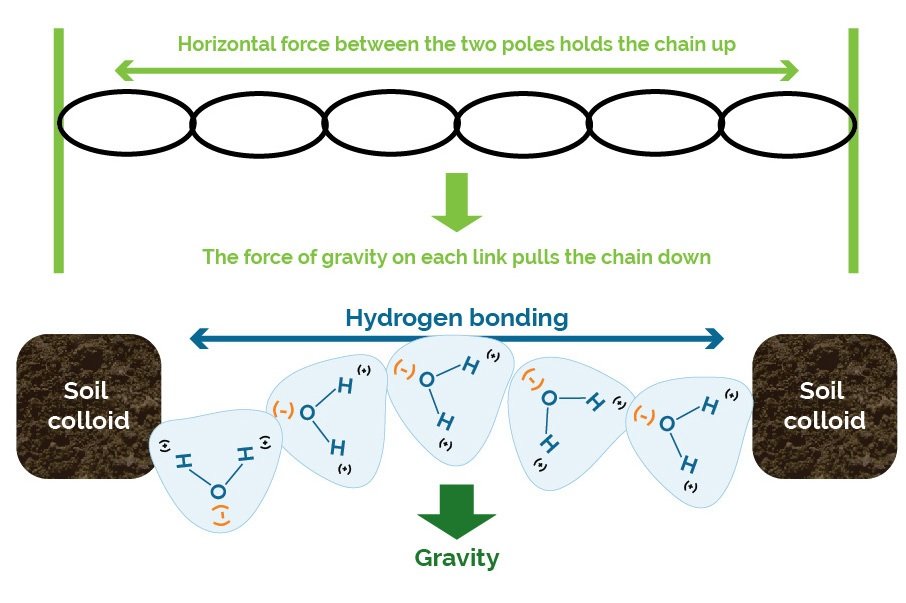 Figure 4. Water molecules behave like links in a chain. 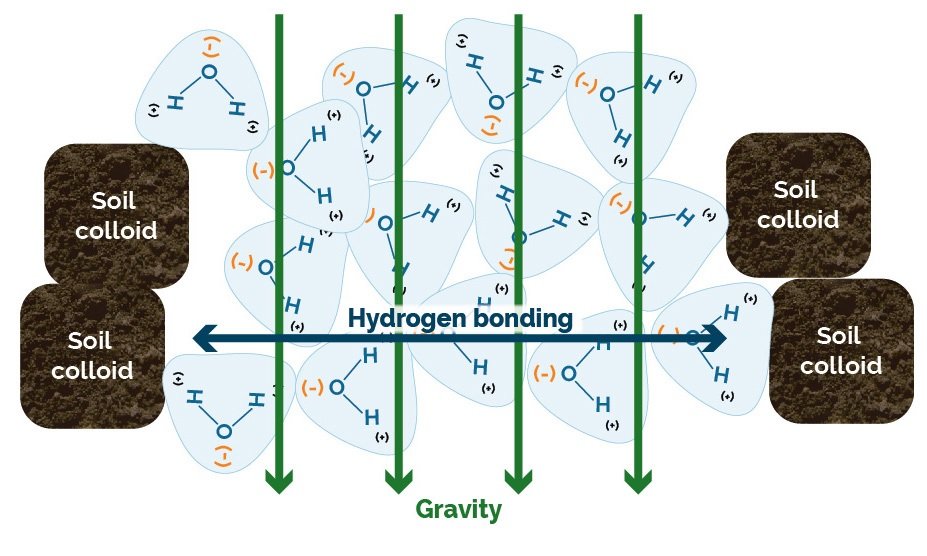 Figure 5. Multiple forces are pulling on all water molecules in the soil profile.

The chain of water molecules breaks when the downward force of gravity is greater than the lateral and upward forces of hydrogen bonding. When the chain breaks, water drains from the soil pore (Figure 6). 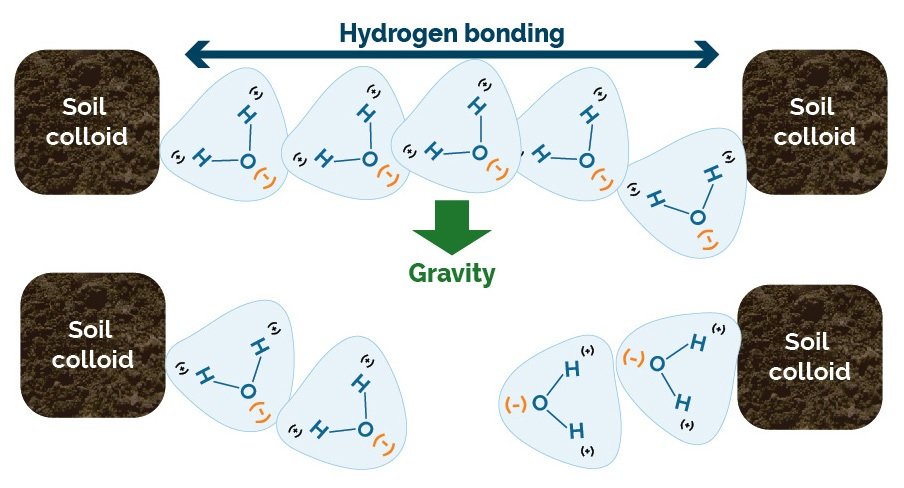 Figure 6. For soil pores with larger openings at their base, the force of gravity is stronger, and water drains from the centre of the pore.

If the soil pore is small, water remains in the pore. If the pore is larger, water drains from the centre of the pore. Liquid water associated with crushed ice in an excellent model to show how soil pores retain water (Figure 7). 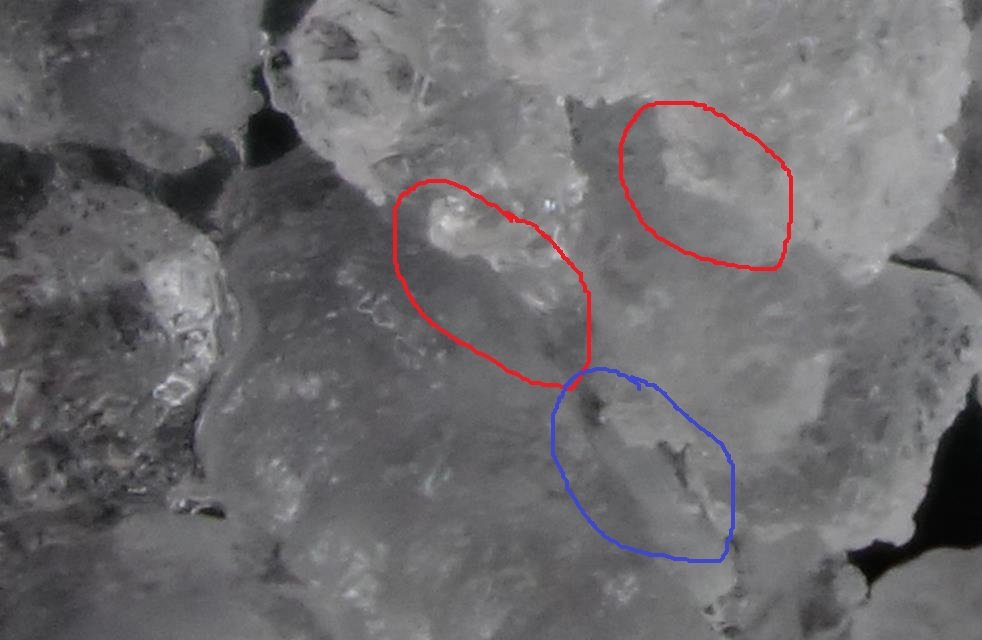 Macropores and micropores comprise approximately 40- 50% of the volume of an undisturbed, well-granulated silt loam soil (Brady, 1990). The amount of water present in this soil depends on when the last rainfall or irrigation event occurred and the water demand of the crop (Figure 8). 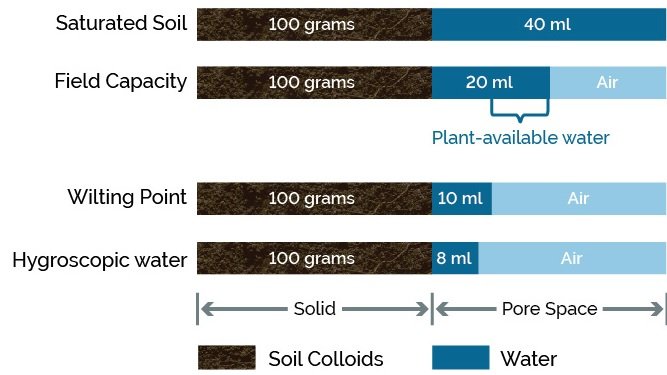 Figure 8. Volumes of water and air associated with soil pores in 100 grams of a well-granulated silt loam soil.

All soil pores contain water shortly after a substantial rainfall or irrigation event. The force of gravity pulls water molecules downward and drains water from the macropores. This continuous mass of water moves via saturated flow. As the water drains, the retentive forces exerted by soil colloids and the water molecules themselves eventually negate the force of gravity.

Plant roots pull water from soil until the retentive forces exerted by soil colloids equal the pulling forces of plant roots. When these soil retentive forces become greater, they overpower plant root pulling forces and plants wilt. Although water is still present in the soil, soil colloids hold this water so tightly that this water is not available for plant uptake. Proper water management must therefore focus on how to maximize the time that water levels in the soil are between field capacity and wilting point levels. This includes tiling and other forms of drainage to drain saturated or nearly saturated soils more quickly and irrigation to meet evapotranspiration and crop demand. If the water content of the soil goes below the wilting point, the first water added to this soil must address soil demand. After the needs of the soil are satisfied, additional irrigation water addresses plant demand.

Highly productive, well-aggregated, agricultural soils tend to consist of about 50% solids and about 50% pore space with an equal distribution of macropores and micropores in this pore space (Brady, 1990). This ratio of macropores to micropores allows soil to store ample water for plant growth while allowing for gaseous exchange in the soil profile to provide oxygen to plant roots. Soil minerals have a particle density of about 2.6 g/ml, so a soil consisting of 50% pore volume will have a bulk density near 1.3 g/ml.

A noticeable reduction in the percent of macropores is apparent if soil bulk density of a silt loam soil approaches 1.6 g/ml and macropores are almost non-existent as the bulk density approaches 2.0 g/ml. Modern broadacre crop production requires heavy machinery to pass over the soil. Soil is compacted with each machinery operation. Based on published studies, soil in corn production increases bulk density (more compacted) by 19% and decreases pore volume by 15% when compared to undisturbed soil of the same soil type (Brady, 1990). The soil’s first response to compaction is to decrease the size, percentage, and distribution of macropores.

Compaction reduces the soil’s ability to supply water to the crop plants because:

As a comparison, it is much easier to pump water through a one-inch hose that it is to pump water through the tiny orifice of a spray nozzle. As the amount of compaction increases, the percent of macropores decrease. If the more compacted zone is a uniform sheet near the soil surface, the rate of water infiltration deeper into the root zone of the soil profile is restricted during rainfall or irrigation, potentially reducing the ability to fully ‘recharge’ the water-holding capacity of the soil. Improper tillage of soils that are worked a bit too wet can cause a sheeted zone of compaction near the soil surface. 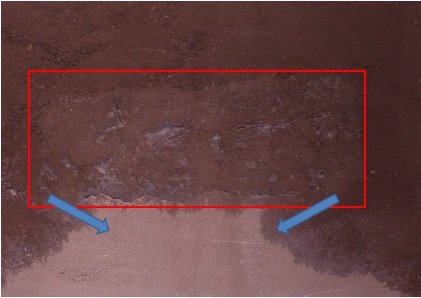 There are two critical problems if the pore volume is predominantly micropores (Hillel, 1980). First, roots require oxygen for proper growth. If all soil pores are filled with water, there is no opportunity for gaseous exchange in the soil profile, so there is limited opportunity for roots to extract critical amounts of oxygen from the soil atmosphere. Second, plant-available water moves primarily via unsaturated flow. For example, corn roots penetrate about 1% of the total soil volume as the corn plant grows. As corn roots grow through the soil profile, they extract plant-available water within the soil zone immediately surrounding the roots. The soil responds by allowing water further from the roots to be pulled toward the corn roots via unsaturated flow. During unsaturated flow, water movement is very slow and becomes even slower as the pore size decreases. Corn plants growing in the same soil type are therefore more likely to show and respond to greater water stress in the more compacted soil.

One way to illustrate the effect of compaction on root growth is with the following greenhouse study. Seeds of corn were planted into soil compacted to bulk densities of 1.17, 1.25, and 1.38 g/ml in soil columns. Corn plants were harvested at the V5 growth stage. Shoot growth and leaf stature differed little among corn plants growing in these three soil treatments. However, root growth decreased dramatically as soil compaction increased (Figure 10). In compacted soils, limited root growth limits the opportunity for water and nutrient uptake. 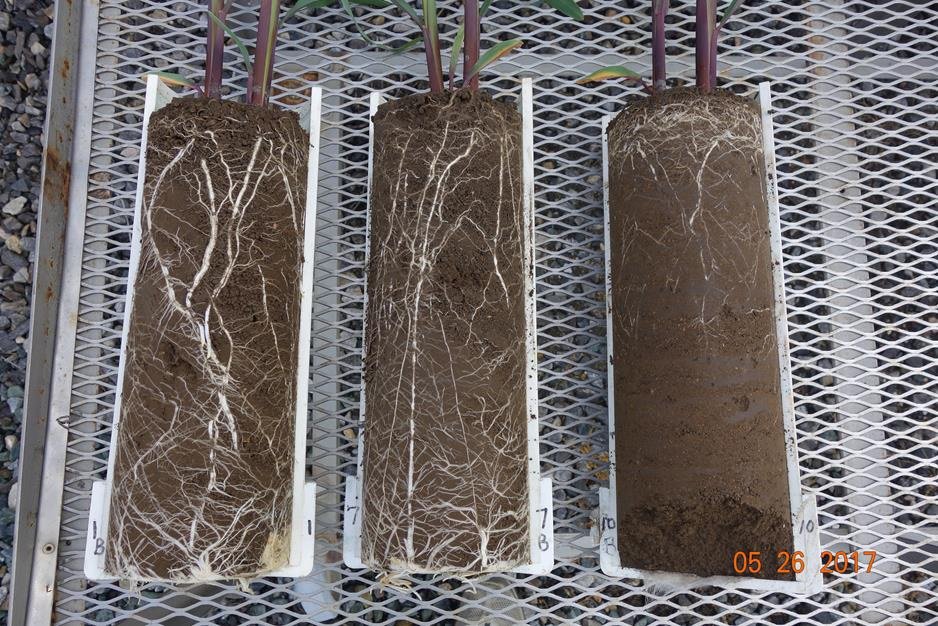 Soil compaction is an unavoidable result of broadacre cropping

Each pass of an implement in crop production compacts the soil. Soil compaction cannot be eliminated, so it must be managed. Ways to manage soil compaction are:

The foregoing is provided for informational use only.
Please contact your local Pioneer Seeds representative for information and suggestions specific to your operation. Product performance is variable and depends on many factors such as moisture and heat stress, soil type, management practices and environmental stress as well as disease and pest pressures. Individual results may vary.

Your Seed is backed by
local experience

With dedicated and highly skilled team members located right throughout Australia you can be sure of accessing the best local knowledge to help you maximise your investment in Pioneer® brand hybrid seed. Get in touch with your local Territory Sales Manager or Farm Services Consultant today.